Thanks to their flexibility, they are ideal to insulate pipes which are difficult to access and assure constant solar yields.

Insulation must be even more optimised for solar thermal applications than anywhere else. Since the pipelines are partially exposed to the open air, they are subjected to various weather influences. If the insulation becomes soaked, its conductivity also increases, wherein its thermal performance capacity is reduced. Since moisture can form on its exterior, an additional covering in the outside area alone is often insufficient. Insulation based on synthetic rubber is non-hygroscopic, thanks to its closed-cell structure. It maintains a thermal conductivity equilibrium and retains its insulating capacity even under the influence of moisture. 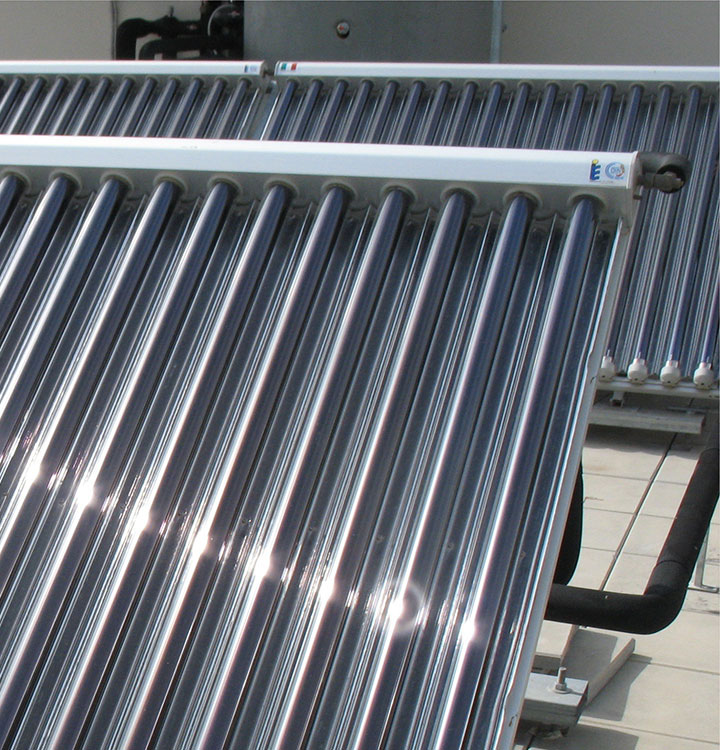 Solar systems are gaining increasing importance as an alternative energy source. In order to ensure they provide continuously high yields, the pipework needs to be protected from energy losses. Flexible, high temperature pipe insulation has proven to be up to the elevated demands of solar applications.

Resistance against wind and weather.

UV radiation, humidity, heat, and other climatic stress can cause a great deal of damage to insulation. Therefore, good weather resistance is extremely important. This can be tested with accelerated artificial weathering of the insulating material. However, since laboratory tests cannot replicate all real influential factors - due to regional differences - additional endurance testing under extreme conditions is recommended.

Flexible from the roof to the basement.

The construction site situation is often more complex outside than inside. If pipelines are routed in areas which are difficult to access, the insulation becomes a challenge. FEF insulation tubes can be the solution, because they are flexible and adhere very well. Applied at high temperatures, the material is also UV-resistant and ready for use in exposed locations even without an additional coating. However, an additional covering is recommended for high thermal loads, such as a sheet metal casing.

The thermal resistance of the insulation is also an important factor. High heat resistance is essential, because solar systems generate significantly higher temperatures at peak times than hot water lines and other applications. FEF insulation has proven to perform particularly well in this connection. It also withstands threshold temperatures of up to 150°C if the material has been optimised for this area of application. This can be guaranteed when the material is based on EPDM or acrylate rubber. In addition to continuous application temperatures of 150°C, short-term loads of up to 175°C are also permissible.

We use cookies on our website. Some of them are essential for the operation of the site, while others help us to improve this site and the user experience (tracking cookies). You can decide for yourself whether you want to allow cookies or not. Please note that if you reject them, you may not be able to use all the functionalities of the site.